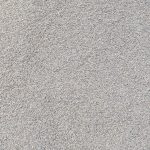 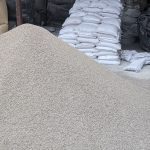 Dolomite is named after the French mineralogist named Dolomieru. Dolomite is a natural stone with double carbonate of calcium and magnesium having composition (CaCO3. MgCO3).It is formed in nature by action of magnesium-bearing solution (sea water, underground water or hydrothermal solution) on calcite — the process being called dolomitization. Dolomite is a widely occurring mineral, generally mined from shallow depths.

Another name for Dolomite is dolostone or dolomite rock. The origin of dolostone is less clear. Some appear to form by in site replacement of calcium by magnesium, and the resulting stone commonly retains the texture and structure of the original limestone. Other dolomites are thought to form by direct precipitation in hyper saline waters where the climate is hot and dry.

Dolomite can be calcined at 1000⁰C when the CO2 is completely driven off leaving a mixture of CaO and MgO. This calcined dolomite starts partially fusing at 1700- 1800⁰C (a process called sintering) by which the magnesia is converted to periclase (the crystallized form of magnesia) and a dense inert product known as dead-burnt dolomite or dolomais formed. Dead-burnt dolomite is essentially a mixture of free lime and periclase.

In India Dolomite is mainly found in parts of Orissa, Chhattisgarh and some parts of Andhra Pradesh, Jharkhand, Rajasthan and Karnataka states.

Dolomite has many of the uses outlined for limestone, plus several others, including in refractories, in seawater magnesia and magnesium metal production, and as a dimension stone. Although less common than limestone, dolomite production, particularly for aggregates, is extremely widespread.

The principal uses of dolomite are:

Refractory materials are defined as those resistant to heat and having a melting temperature of not less than 15800 C. The function of Dolomite in refractories is as a lining on the furnace which helps to not only withstand high temperature, but to also withstand temperature fluctuation, and to resist penetration, abrasion, and erosion by hot gases and molten materials.

Chemically, glass is a mixture of the silicates of sodium, calcium and magnesium. The composition of typical ordinary glass is [18Na2O.2MgO.8CaO.72SiO2]. Ordinary glass contains 4-5% magnesia and some special glasses may contain up to 15% of it. This magnesium is contributed by dolomite.

For recovering MgO, sea water is first treated with calcined dolomite (or calcined limestone). The CaO (from dolomite or limestone) forms Ca(OH)2 and, then, the latter is reacted with the sea water to form Mg(OH)2 which is precipitated using a seed. This Mg(OH)2 cake can be dried at 10000 C to get MgO or can be treated with HCl acid to form a 15% MgCl2 solution, which, on electrolysis, yields magnesium metal.

Ground dolomite is suitable for application to acidic soil by virtue of its basicity. It also improves porosity of the soil. Besides, it is a source of magnesium which is an essential element in the chlorophyll (C55H70MgN4O5-6) of the plants.

Named after a chemist named Sorel who first invented it in 1853, Sorelcement(also called magnesium oxychloride cement) having molecular formula [(MgO)2(MgCl2)(H2O)11] is a rapidly setting cement (sets in 3-4 hours to a very hard cement). After setting, it becomes light and pleasingly brownish orange in appearance. It is resistant to fire and vermin. It can be used in flooring of railway carriages, kitchens and bathrooms, in false roofing, in preparation of adhesive composition and as a thickener in polyester sheet moulding materials where it forms a salt with the carboxylic end groups of the polyester molecules.

In the manufacturing of Sorel cement, dolomite is used as a cheap and inferior substitute ofmagnesite. It is first calcined by driving off all the CO2 at about 10000C, finely ground andthen, 100 parts of this MgO is treated with a 100 parts of a strong solution of MgCl2 inpresence of 1 part of sodium hexametaphosphate. Sodium hexametaphosphate and excessMgO react to form magnesium polyphosphate complex. The latter is completely insolubleand serves to tie up CaO, which otherwise will tend to absorb water to form Ca(OH)2 (i.e.,slake). Thus, degradation of the quality of the cement is prevented.

Magnesium oxysulphate cement is a quick-drying material (hardens in 10 minutes) and is useful for mending cracks in concrete roadways. It is made by first treating the calcined dolomite with calcium sulphate and water to obtain magnesium sulphateheptahydrate (MgSO4.7H2O) then to a 50% concentrated solution of this, sodium hexametaphosphate, MgO and water are added. The MgSO4.7H2O, part of MgO and water combine to form a slurry of magnesium oxysulphate (MgSO4.5MgO.8H2O) or MOS in short. In a parallel reaction, Sodium hexametaphosphate and a part of MgO react to form magnesium polyphosphate complex. The latter is completely insoluble and serves to tie up CaO which is thus prevented from slaking and becoming expansive Ca(OH)2 that tends to degrade the quality of the cement when exposed to humidity. Its properties are similar to those of Sorel cement.

In the sulphite process of paper manufacturing, both CaO and MgO components of dolomite are useful. By mixing water, CaO is converted to slaked lime or Ca(OH)2 and MgO to Mg(OH)2. Then by passing SO2 gas, they are converted to CaHSO3 and MgHSO3 which are acidic in nature. They together dissolve all the constituents of wood chips except cellulose, but MgHSO3 being more reactive, more soluble and more stable than CaHSO3, increases the efficiency of the process.In this process, free silica and grit are objectionable because their grind ability being poor and they being insoluble, they may affect the smoothness of the finished paper. Iron oxide affects the whiteness of the product because it is a coloring substance and is carried to the final pulp.

In the leather industry slaked lime is used to loosen the hairs of the skin so that they can be removed easily. Lime water softens the epidermal cells and dissolves the mucous layer, thereby loosening the hairs. Dolomite can also be used as a source of lime. Fe2O3 is objectionable because it may stain white leather.

In this industry, dolomite is not used directly, but in the form of pure white magnesium carbonate (MgCO3) prepared from it. For this purpose, first, a saturated aqueous solution of dolomite powder is made by passing CO2 through it under high pressure and simultaneously raising the temperature. As a result, CaCO3 precipitates. The dolomite solution is filtered out and heated to near boiling so that both water and CO2 are driven out, and crystals of MgCO3 precipitates. This MgCO3 is pure white and it has an average refractive index of 1.5 but is optically anisotropic (i.e., refractive index changes with variations in the orientation of the crystals). Thus obtained MgCO3 is used in pharmaceuticals as Excipient, Flavour, Intaglio printing.

Adhesive is an organic or inorganic substance capable of bonding together other substances by surface attachment. High-purity white dolomite is added to certain adhesives with a view to:

For high-performance adhesive where even a minute shrinkage associated with cracks is not permissible, dolomite is mixed with calcite. Dolomite is, however, is not suitable to acrylicbased adhesives because the former is basic (pH 10) and latter is acidic (pH 4) and the two react.

Crushed dolomite is used as a component of concrete aggregates for building and road construction. The ability of CaO to bond with cement and bitumen is the key criterion.

Crushed dolomite is used as a component of concrete aggregates for building and road construction. The ability of CaO to bond with cement and bitumen is the key criterion.

Highly porous bed of dolomite is used for filtering sewage water. The surfaces of the particles should be as uneven and rough as possible because the bacteria get stuck to such surfaces. Silica is not objectionable, but clay matter is because the latter fills up and blocks the pores.

For use as refractories, dolomite is converted to dead-burnt dolomite by sintering it at1700-18000C (for achieving higher density, sintering can be continued up to 20000C). At this temperature the MgO (formed due to calcination of the MgCO3 component) is partially fused to form periclase which is an inert dense and stable product. Dead-burnt dolomite is thereforea mixture of periclase and CaO. For making bricks, this material is crushed and mouldpressedwith the help of some binder.

They are used as fillers in fertilizers, dolomite must be free from colouring impuritiessuch as oxides of iron, chromium, manganese, etc. It is added as a bulking agent andfor neutralizing acidity of soil.

Ground dolomite is suitable for application to acidic soil by virtueof its basicity. It also improves porosity of the soil. Besides, it is a source of magnesiumwhich is an essential element in the chlorophyll (C55H70MgN4O5-6) of the plants. For thispurpose, high grade is not required, but silica is considered deleterious because it increasesthe grinding cost. Moisture is also objectionable because it adds to the weight. Dolomite isgenerally applied at the rate of 2-3 tons per acre. However, it suffers from the disadvantage ofpoor solubility in water.

Ashok Mineral Enterprises is a No. 1 dolomite supplier and Manufacturer in Chennai, Tamil Nadu with a variety of products such as dolomite powder, dolomite grit, dolomite granules, micronized dolomite, dolomite lumps and dolomite chips.

We cater to industries such as Paint, rubber, welding electrodes, Wall putty, Chemical & dyes, friction, plastic, steel and glass. For further details on grades available and offers please contact us.